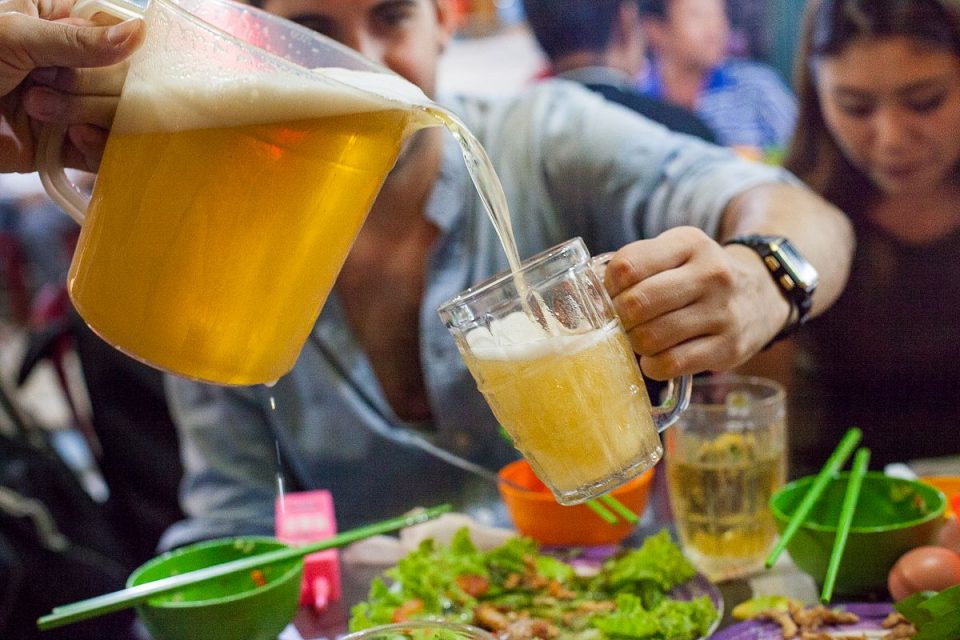 Domestic and foreign tourists know that Hanoi Vietnam has the fresh beer (called Bia Hoi) but not many apprehend the origin of Bia Hoi in Hanoi. The vacation in the capital city will not be complete without drinking the fresh beer, and especially in locals’ ways. After the sunset, tourists often go to the corners of Ta Hien – Luong Ngoc Quyen streets to savor the fresh beer (beer with the low alcohol degrees). This is the popular venue in which they sit on the plastic stools and chat.

The Origin of Bia Hoi in Hanoi Vietnam

The first brewery – the Hommel Brewery was established in Hanoi in the 1890s. Brett MacDouall, the co-founder of Hanoi Beer Tour, told CNN that “the French brought the beer drinking culture to Vietnam. Previously, people here drunk traditional home-brewed rice wine. After the establishment of the only factory, the beer drinking culture was spread to the public. However, at that time, the price of beer was quite expensive.

Until the 1950s when Vietnam got independence, the brewery was renamed Hanoi Brewery from which “Bia Hoi” or the fresh beer was introduced to the local people. It was no longer a limited luxury for the rich. Then, the beer store was opened in the Ta Hien Street that sold a glass of beer at the cheap price (only a few coins). The local ingredients were used to make the fresh and low-alcohol beer (about 3% alcohol). Therefore, people could drink several glasses of this type of home-made beer to refresh after the hard-working days in Hanoi’s hot weather conditions.

Nowadays, Vietnam is one of the top countries that drink beer in Asia, consuming 3.8 billion liters per year according to the surveys in 2016 by the Ministry of Industry and Trade. Over decades, the number of restaurants and bars has increased rapidly in the Ta Hien Street, together with the roadside eateries filled with the plastic stools on the sidewalks. Because “Bia Hoi” or the fresh beer does not bring profit as much as the beer bottle, some local shop owners change to sell bottles of beer. Anyway, Ta Hien Street is still the right address to enjoy the Bia Hoi Hanoi.

The low-alcohol beer is very fresh and stored in the non-sterilization and non-preservative modes. This beer is brewed fresh every single day, and contained in the large containers called “beer bombs.” When a customer wants a glass of beer, the waiter just needs to pour the beer in the glass. One special trait in the ways that the Hanoians drink beer is that to ensure the fresh taste, if the beer is not consumed in a day, it will be disused (not left overnight). Also, the Hanoians often drink beer and eat the grilled meat, grilled squid, sausage, and fermented pork roll (Nem Chua).

To drink beer like people in Hanoi, guests are recommended to visit the local roadside eateries, sit on the little stools, and call glasses of “Bia Hoi.” The local restaurants also serve this kind of beer, but most of the crowd enjoy drinking on the sidewalks which are easy to mingle and chat. Glasses of the fresh beer can eliminate the scorching summer heat or ease the tired working day that makes “Bia Hoi” the cultural symbol of Hanoi.

If you travel to Vietnam for Hanoi food tour and want to eat and drink like the locals for a memorable trip, then go to drink Bia Hoi in Ta Hien Street. Other good addresses are Bia Hoi Tong Dan, Bia Hoi Duong Thanh, and Bia Hoi Lan Chin. Enjoy beer pleasantly and chat with friends. After all, you will understand why the fresh beer in Hanoi attracts not only the locals but also the tourists.