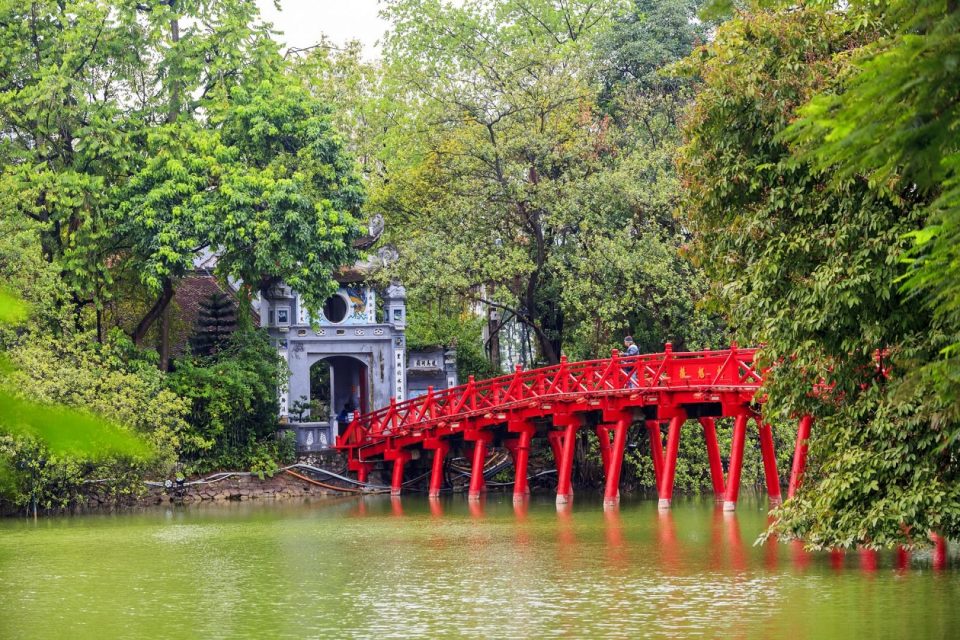 Hanoi, literally the “city between the rivers”, is the capital and second biggest city of Viet Nam. The historical Old Town, the colonial French Quarter, ancient temples of more than thousand years of age and various scenic lakes and landmarks make up one of the most fascinating cities of Southeast Asia, with a mix of Chinese and French influences enriching the vibrant Vietnamese culture.

The compact city centre is bordered by the Red River (Song Hong) to the east as well as to the north and a railway line to the west with the Hoan Kiem Lake nowadays being its focal point of public life and an excellent point of orientation. North of the lake lies Hanoi’s historic heart, the Old Quarter (Phố Cổ Hà Nội). Most of the street names still originate from the 13th century when every guild had its own street, usually called “Hàng” meaning “merchandise” followed by the name of the product, which is produced or sold there. Since at that time the tax depended on the width of the house frontage, the area is famous for its so-called tube houses, buildings with narrow frontages of two to three metres with a length of 20 to 60 metres.

The city’s most prominent sights include the Temple of Literature (Văn Miếu), site of the oldest university in Vietnam dating back to 1070, the One-Pillar Pagoda (Chùa Một Cột), one of Viet Nam’s most iconic temples, the Flag Tower of Hanoi (Cột cờ Hà Nội), one of the few remains of the old Hanoi Citadel and one of the symbols of the city and many museums. Hanoi’s narrow and crowded streets filled with various exotic scents, hawkers weaving through motorbikes and cyclos overloaded with fruits, livestock as well as human cargo create this unique fusion of old and new making it a reflection of the rapid changes the country is recently going through. There’s no better way of exploring this spirit of Hanoi than wandering around the streets, soaking up its sights, sounds and smells.

Hanoi has been capital of Vietnam for nearly a thousand years, during which the city has endured numerous invasions, occupations, restorations and name changes. The Chinese ruled Hanoi and much of Vietnam off and on for centuries, until a Vietnamese general named Le Loi (the later King Le Thai To) finally secured the nation’s independence in 1428. It wasn’t until 1831 that the Nguyen Dynasty renamed the city Ha Noi, which can be translated as “Between Rivers” or “River Interior”.

In mid-1800s, Viet Nam was colonized by the French and Ha Noi became capital of French Indochina in 1887. The French administration imposed significant political and cultural changes on Vietnamese society. A Western-style system of modern education was developed, and Christianity was introduced into Vietnamese society. In addition, it was also the development of plantation economies to promote the exports of tobacco, indigo, tea and coffee. The French colonialists largely ignored increasing calls for self-government and civil rights. A nationalist political movement soon emerged, with leaders such as Phan Boi Chau, Phan Chu Trinh, Emperor Ham Nghi and Ho Chi Minh calling for independence.

During the Second World War the Japanese occupied Hanoi and the rest of Viet Nam (1940-1945), exploited the country for its natural resources. With the end of the war, the French resumed control of their colony. In response, Ho Chi Minh launched a liberation movement that led to eight bloody years of war with France. The French finally withdrew in 1954, leaving Vietnam divided in half at the 17th parallel, with Ho Chi Minh’s communist Democratic Republic of Vietnam based in the north, and the Republic of Vietnam in the south. It follows the bitter Vietnam War (the American War), during which Ha Noi suffered from heavy bombardments. Ha Noi became the capital of Vietnam when North and South Vietnam were formally reunited in July 1976.

Hanoi is located in the Red River Delta, in the center of North Vietnam. It is encompassed by Thai Nguyen Province to the north, Vinh Phuc and Ha Tay to the west and south, Bac Giang, Bac Ninh and Hung Yen provinces to the east and south-east. Hanoi means “the hinterland between the rivers” (Ha: river, Noi: interior). Hanoi’s territory is washed by the Red River (the portion of the Red River embracing Hanoi is approximately 40km long) and its tributaries, but there are some other rivers flowing through the capital, including Duong, Cau, Ca Lo, Day, Nhue, Tich, To Lich and Kim Nguu.

Climate: Hanoi is situated in a tropical monsoon zone with two main seasons. During the dry season, which lasts from October to April, it is cold and there is very little rainfall, except from January to March, when the weather is still cold but there is some light rain. The wet season, from May to September, is hot with heavy rains and storms. The average annual temperature is 23.2ºC (73.7ºF) and the average annual rainfall is 1,800mm. The average temperature in winter is 17.2ºC (62.9ºF), but can go down to 8?C (46.4ºF). The average temperature in summer is 29.2ºC (84.6ºF, but can reach up to 39ºC (102.2ºF)

Throughout the thousand years of its eventful history, marked by destruction, wars and natural calamities, Hanoi still preserves many ancient architectural works including the Old Quarter and over 600 pagodas and temples. Famous sites include the One Pillar Pagoda (built in 1049), the Temple of Literature (built in 1070), Hanoi Citadel, Hanoi Opera House, President Ho Chi Minh’s Mausoleum…

Hanoi also characteristically contains 18 beautiful lakes such as Hoan Kiem Lake, West Lake, and Truc Bach Lake…, which are the lungs of the city, with their surrounding gardens and trees providing a vital source of energy.

By air: Noi Bai International Airport, over 35km from the city center, is one of the biggest airports of the country with various international and domestic routes. There are domestic flights from Hanoi to Da Nang, Dien Bien, Ho Chi Minh City, Hue, Nha Trang and international flights to many countries in over the world.

By train: Hanoi Railway Station is Vietnam’s main railway station. It is the starting point of five railway lines leading to almost every province in Vietnam.

Travel Expert | Top Things to Do & Places to Visit in Seattle